In recent decades various violins once attributed to Stradivari and del Gesù have been reconsidered as the work of Jack Lott in their entirety or in part. His career in the 19th century was such that he played a part in the restoration of many original instruments so that there are also original instruments that have been significantly altered in their appearance by him. This particular area of expertise remains a difficult area, especially when dealing with instruments that may have already been heavily restored.

The violin illustrated here is a Lott copy of a 1716 Stradivari (probably the Messiah) with antiqued varnish  preserved in fairly original condition. Here at IR=850nm we observed uniform longitudinal striations that have filled with dirt in the area where the red varnish has been removed. We can also see that these are not present in the area under the thick red varnish. We think it is unlikely that these are later wear marks because of their uniformity, and because we would expect to see related marks in the varnish where it is present. Hence these are probably tool marks relating to the process of antiquing. These observations may be of use in determining authenticity. 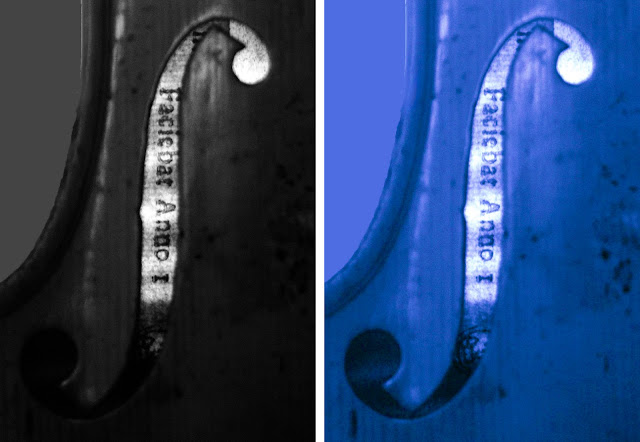 ECR Casebook: High levels of carbon in printer's ink illuminated through the back of a violin at 850nm.